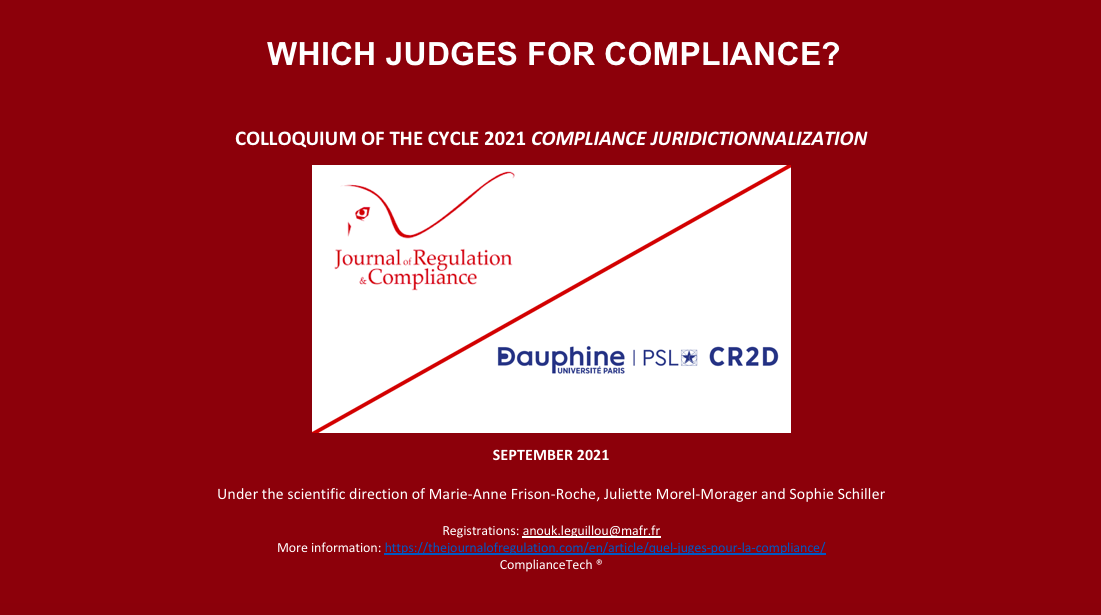 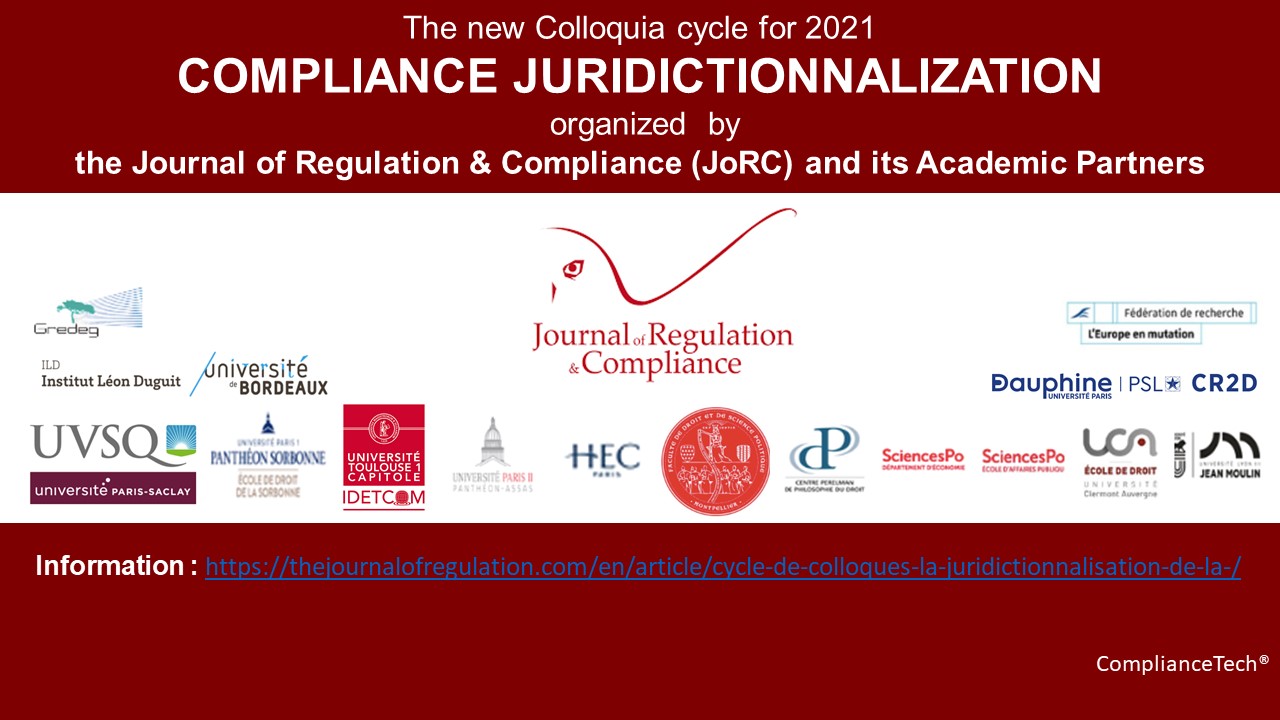 In the inaugural conference of March 2, 2018, Koen Lenaerts brings the "Europe of Compliance" to life 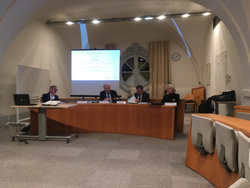 Among all the things that were important to remember, one of the things that struck me most in the extraordinary conference of the President of the Court of Justice of the European Union Koen Lenaerts on "Europe of the Compliance "held on March 2, 2018 was his ability to make" live Europe ". Not only to make it understand but also to make it "live". Here is the challenge: that compliance is not an accumulation of processes without reason and without flesh, but a living whole taking its meaning into consideration of the human being, a person whose judge is concerned.

On 2 March 2018, Koen Lenaerts therefore came to an amphitheater at the University Panthéon-Assas (Paris 2) to inaugurate the series of conferences organized by the Journal of Regulation & Compliance (JoRC), a cycle that has the general title: Pour une Europe de la Compliance (For the Europe of Compliance). The School of Public Affairs of Sciences Po, the Department of Economics of Sciences Po, the Ecole doctorale de droit privé  (Doctoral School of Private Law) at the Université Panthéon-Assas- Paris 2 (Panthéon-Assas University - Paris 2) and the School of Law of the University Panthéon-Sorbonne (Paris I), are associated with this cycle. Many personalities will take the floor.

Presented by Professor Thierry Bonneau, the conference made by President Koen Lenaerts was extremely rich and solid, perfectly constructed. Everyone had known the quality of the conference to be delivered by the President of the CJEU. The content of his demonstration will be found in the article he will give for the book that will be published in the Régulations & Compliance Series edited by Marie-Anne Frison-Roche at Éditions Dalloz. And the reader will find all the strength of this demonstration. This is necessary to venture into this area of "Compliance" : Koen Lenaerts recalled that we were still looking for the definition and a French term that would do justice to a satisfactory definition!footnote-90. This question was echoed by Antoine Garapon in his discussion.

Embodying the firmness that must be shown when words are uncertain, President Koen Lenaerts emphasized that the European Union is based on "Rule of Law". This means that the behaviors must respect Law. For that, - and that is why it is necessary to take in the literal sense the English expression "to comply with", the enterprise must not be passive but to make sure that its behavior is actually respectful of legal prescriptions. In this, there is a general paradigm shift, which inverses the relation betwenn the operator and the rules, from the Ex Post to the Ex Ante!footnote-89  as the entreprise has to be itself active to secure the effectiveness of the rule of Law. This internalization of the rule by the company develops both a procedural culture and a behavioral culture, in which companies can express an ethical dimension and build a "Trust Pact" !footnote-88 with states and public authorities. This change has been brought about by globalization, since states no longer have the means to impose ethical norms of behavior on businesses through the Ex Post intervention of their jurisdiction, but States like companies are gaining the benefit of this internalisation of rules in compagnies because the Compliance is inseparable from the accountability by which the company is compelled to justify that it actually tends to achieve the overall goals assigned by the public authority.

Thus, after exposing the general movement by which Europe opened up to this upheaval, President Koen Lenaerts took on three technical dimensions crossed by this new conception. The first is the Financial Markets Law. The second is Competition Law, about which the President has notably developed the Court's reflections on whether the adoption of a compliance program by an enterprise found to have violated Competition Law, in particular by "negligence" is neutral, or constitutes a mitigating circumstance or constitutes an aggravating circumstance. This question was taken up after the presentation in the discussion with the room. The third is that of personal data. Taking again as in a waltz with three times his remarks, the president of the Court of Justice found that the compliance, whereas it consists in transforming the Ex Post into Ex Ante becomes juridicalised and in this the Court of justice holds its not only in Europe but also in relation to the world, without however ever forgetting that it is the States that are drawing up the rules that are the foundation of Europe.

We will find in the article that will be published all these precious elements and no doubt that the elegance of the pen will be equal to that of speech.

But, written exercise requires, the reader will not find what we had the chance to attend: the story of two cases by the one I would prefer to name the "Professor Koen Lenaerts".

Two famous cases, which we teachers, comment and remind in our courses, that students learn and recite, quote in their copies. But never that way.

The first case is the Schrerms case, where the court said that Facebook could not transfer this person's personal data to the United States since he was opposed to it. To make it clear, the President revived it through the litigant, who was a student and for this reason he spoke directly to the students present in the amphitheater. He pointed out that the plaintiff at the origin of the case was a law student, like them. He detailed his situation in Austria, making some quotes in perfect German, pointing out that this student was now at the doctoral stage, inviting students to be brave, as he was. At each episode of the story, the speaker told the students, making some detours on his own student life because finally we were all in family ... Alma Mater. But his hands were telling the story even more: they were thrown themselves into the story, they brewed the space, it seemed as if they themselves were no more grandiloquent than the speaker but found their place exactly , in a magisterial position. Yes, here is a president in front of which companies have a hard time hiding the truth, a president with such firm hands and whose torso does not move but turns to the left and right to talk to everyone.

The second story was even more beautiful. The Google Spain case, I know it. I even know it by heart. I read it, commented on it, cited it a lot of times ... But all of a sudden that's what happened to a small Spanish merchant: President Koen Lenaerts told us his story, and I rediscovered the case. A small Spanish shopkeeper, whose name the speaker uttered in perfect Spanish, obtained from the Court of Justice that his "right to be forgotten" was recognized. President underlined the apparent paradox of his  insistence for the appearance of his surname in the judgment by which this person had thus obtained the erasing of his surname! Yes, I did not notice ... Why did he ask for the mention of his name in the right to have his name deleted? Because it's a matter of honor. This is what the speaker insisted: do not joke with honor. And if you do, even Google will lose.

The merchant had been subject to a forced property sale procedure because of financial difficulty, which spanish newspapers had echoed. His honor was been trampled. Then, by a happy return of fortune, he had recovered his property, his prosperity, his reputation. But from that, the press had not talked about it. Some lines in a newspaper of legal announcements, but that it is nothing for the human soul. That's why he wanted these mechanical digital links to disappear, which always and for all end up with articles presenting him as a wretch without ever ending up with articles presenting him as a prosperous merchant (because of the non-existence of these second articles).

The speaker emphasized this dimension very much. And we know that the General Regulations that will come into force in May 2018 on personal data, which intrigues so much the Americans, draws in the judgment Google Spain its main solution in the matter: this "right to be forgotten" , subjective right so strange.

He emphasized this dimension very much. And we know that the General Regulations that will come into force in May 2018 on personal data, which intrigues so much the Americans, draws in the judgment Google Spain its main solution in the matter: this "right to be forgotten" , subjective right so strange.

Listening to President Koen Lenaerts, how not to think of Carbonnier? to  his articles of it, especially on sociological rule : "small causes, great effects"?

From this conference, it will remain a great article, but as in the theater, where the ephemeral is part of the beauty of this art, what were these two stories, told by the one who knew how to listen when it was necessary to decide the two cases, stories told with the two firm hands that danced inviting students to enter this round, even as the President of the Court of Justice had to leave immediately to Luxembourg to hold such heavy obligations, yes it was simply beautiful .

A symposium is held in Paris on 11 December 2014: whether or not a single court to impose the sanctions on financial markets

To read the presentation (in French), click on the French flag.