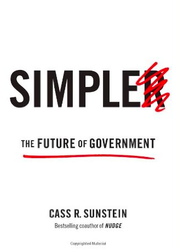 Cass R. Sunstein is a prominent Law & Economics teacher (first at the University of Chicago, then at Harvard). Not only has he written reference handbooks on Regulation, he was also the one who inspired the Regulation policies of Obama. In his 2013 book Simpler, he expresses his stance: to be better, public policies need to be simpler.

In this essay, Sunstein explores how behavorial economics might lead to improve public decision-making processes. He bases its stances upon his experience as the Administrator, from 2009 to 2012, of the US Office of Information and Regulatory Affairs; that is why anyone who cares about Regulation should read it and ask themselves if simplicity, as the author states, may or may not be an actual leading principle for an effective government.

The OIRA, under the supervision of the Office of Management and Budget placed within the Executive Office, reviews the draft Regulations that are prepared by the cabinets of various rulemaking agencies. In this view, the OIRA can be regarded as a sort of custodian of the quality of Regulation throughout the US; conversely to the mainly consultative functions granted to the Conseil d'Etat in France, the OIRA's opinions are binding. Hence, a draft project shall not be issued nor be enforced without its prior consent. Part of OIRA's defining mission is also to centralize all the information held by diverse people within the executive branch, as to enable its access and circulation between all the rulemaking agencies responsible for elaborating and producing binding regulations.

Simpler is dedicated to the detailed study of the main decisions taken under Sunstein's decisive influence by the OIRA in the Regulation field during Obama's first mandate (2009-2012). Before taking up government functions, Sunstein focused part of his academic work on the interactions that are the most likely to occur between behavioral economics, law and public policy. To him, "a general lesson is that small, inexpensive policy initiatives, informed by behavioral economics, can have big benefits" (p. 41). He namely provides that "without a massive reduction in its current functions, government can be far more effective, far less confusing, far less counterproductive, and far more helpful if it opts, wherever it can, for greater simplicity" (p. 11).

This reference to 'simplicity', from which the name of Sunstein's essay stems, aims at translating all the efforts done by public authorities, under the supervision of the OIRA, to issue rules that were clearer and more accessible than before and that provided their subjects (whether they are citizens, companies, or federal administrations) a greater freedom in the choices they were able to make.

Throughout his book and with a little help from the various situations he had to face during his term at the OIRA, Sunstein shows that there is a virtuous relationship between a better information of the agents (whether they are the authors or the subjects of the norms at stake), a greater simplicity in public decision-making process and a better quality of the regulations  meilleure qualité de la réglementation in force in a State. This paper hence aims to sum up the main points of the essay (I.), before making a few comments about it (II.).