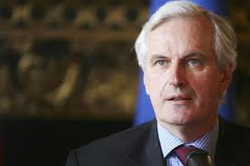 In this speech, Michel Barnier said that fiscal consolidation, financial institution and budget governance aren’t sufficient to to bring Europe back on the path to prosperity and growth and . to restore the trust of citizens.

The core European project is the financial regulation agenda, for creating legal certainty and reassurance for markets.

The orator insists on the fact that financial actors are global and mobile and he remains committed to a global regulatory level playing field, based on mutual recognition between major jurisdictions, avoiding overlaps between equivalent regulatory and supervisory frameworks.

For him, it is necessary "if we want citizens to trust their banks again". It is vital because because "we need to make finance serve society and the real economy".

After descripting the new European supervisory institutions, Michel mentioned his three priorities for the remainder of the year : - shadow banking ; structural reforms of banks (refering to the Commission LIILANEN work) ; consumer and investor protection.