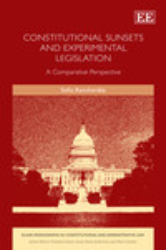 Just released the book of Sofia Ranchordiàs, Constitutional Sunsets and Experimental Legislation. This  topic is particularly important in regulatory systems where this method is used very often.

As soon as Legislation is case management, it becomes a matter of time, good timing, and efficiency.

Because the figure of the Law has changed its terms should change. The most appropriate law then appears the "experimental law", the "trial law." This ephemeral legislation as regulatory bodies promote, can claim to be part of the future only if it has "successful". Operators must be good students if they want to conserve the Law!footnote-14.

Thus, the law is only a draft and it is its success that allows the standard access to the status that was natural: the Act that applies to the future.

These precarious laws that certains authors and regulatory bodies present as the right model, challenge the constitutional principles, the Constitution itself being the supreme law governing the future.

This book shows the extent to which notions of efficiency, testing, flexibility, can attack the very idea of Parliament Law  and Constitution. It is true that in regulatory systems everything becomes simple regulations, including laws but it is also true that constitutional courts are restive to admit "experimental laws".