On July 6, 2012, regulators, including English, German, Japanese, and North American open investigations about the Libor against banks. 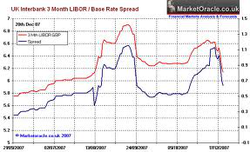 On June 27, 2012, the "Financial Securities Authority – FSA" of the United Kingdom sanctioned the Barclays Bank to have manipulated the Libor. By a chain reaction, on July 6, 2012, the German regulator, Bafin, opened an investigation into banks, with no doubt on Deutsche Bank, while the Japanese regulator, the "Securities Exchange Commission" in the United States, the Canadian competition office, in particular open all investigations since the 6 July concerning all banks within their competence on their statements. In addition, JP Morgan said that it was already the subject of a class action in this regard. The domino effect begins.