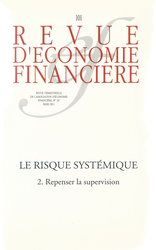 Released in 2011, this special issue focuses on "Supervision" in terms of systemic risk, while the last was on "Regulation" under the same theme.

In order to prevent the next crisis, the will appears to extend the supervision, including on "non-banks", such as insurance companies, and to strengthen it, particularly with regard to the means of control, surveillance and punishment powers of supervisory Authorities.